AS A WINE MAKER

M y aim has always been to express the true terroir of the vineyard and vintage, and along the way I have learnt you can have great success through minimal human intervention in the winemaking process and by simply putting your trust in Mother Nature. I achieve this is by selecting the finest quality fruit from the region and doing as little as possible to it! 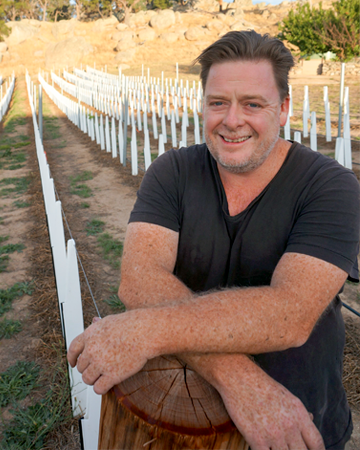 The grapes for Syrahmi Shiraz are sourced and selected from a single vineyard site each year but not necessarily the same vineyard. All of the Shiraz that comes into the winery from the selected vineyards is all handled individually right up until the final selection process where each puncheon and foudre is graded and then selected for either Syrahmi, Demi and in some years La la. Syrahmi and La la are always single clone, single vineyard wines where as Demi is a blend and made up of multiple clones and vineyards.

The following are the carefully selected vineyards for which Syrahmi is currently producing from.

The site has been specifically designed to produce low crops of grapes per vine. The vine density of 4545.45 vines per hectare is over twice the average for the rest of the region. This high density reduces the vines vigour, and the competition between vines for water and nutrients produces a low but better quality grape yield per vine.

Orientation of the vines at Greenstone is also unique, with the rows running in an east-west, rather than the typical north-south direction. This ensures that the rays from the hot afternoon sun are avoided, which is crucial during the ripening period. The resulting lower berry temperatures produce fruits with livelier characters and brighter acidity.

Carl Brown’s vineyard is the only certified organic vineyard in the Heathcote region with biodynamic principles. The 2 hectares were planted in 2001 consisting of one clone, PT23 Shiraz.

The soils of northern Heathcote are the oldest in Victoria and derived from rock of the Cambrian age. The soil lies over basalt bedrock, which creates the perfect landscape for growing Shiraz.

The flat vineyard was planted by the Shelmerdine family in 1994. Of the 8 hectares of vines, 2.8 hectares were planted with PT23 Shiraz.

The vineyard runs north to south at 250m above sea level. The soil is granitic, ironstone washed through with granite sand over yellow and black cracking clays and is surrounded by spectacular granite boulders, very different in comparison to the abovementioned vineyards.

The spring’s vineyard is a small amphitheatre shaped block of 2.8 hectares nestled in the southern foothills of the Heathcote region. The single clone PT23 was planted on SO4 and Telecki rootstock, on a VSP trellis at a density of 700 vines per acre in 1995. The soils are granitic, ironstone washed through with granite sand over yellow and black cracking clays.

The Garden of Earthly Delights

Located in the village of Hesket, the vineyard at Hesket Estate was first established in the 1980’s. Further expansion and refinement occurred in the 1990’s when the Hudspeth Stevenson family purchased the property. The vineyard is at an elevation of 660 metres above sea level. Today Hesket Estate is a boutique cool climate vineyard specialising in MV6 Pinot Noir clone.

Merindoc Vineyard is located on the sweeping slopes of the Macedon Ranges in Tooborac, the southern most part of the Heathcote region. The flat vineyard was planted by the Shelmerdine family in 1994.

The vineyard runs north to south at 250m above sea level. The soil is granitic; ironstone washed through with granite sand over yellow and black cracking clays and is surrounded by spectacular granite boulders. The cool night temperatures allow the grapes to relax after hot summer days resulting in lower berry temperatures producing fruits with livelier characters and brighter acidity.